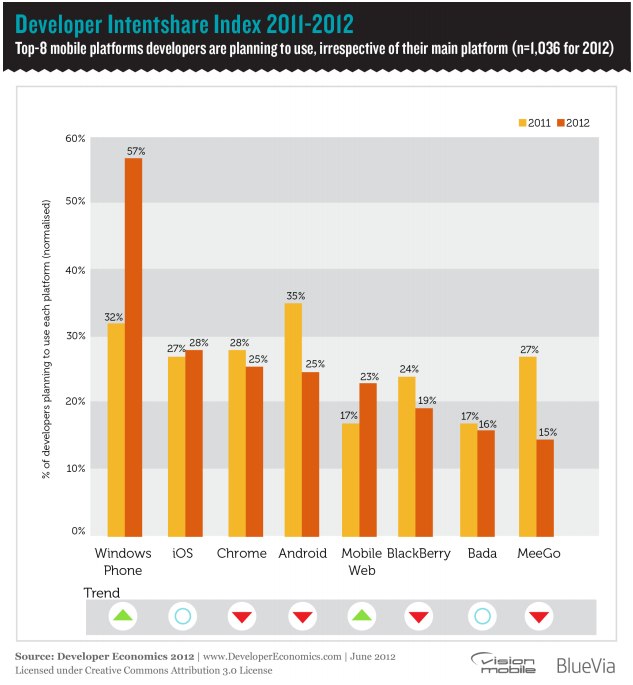 Though Windows Phone 8 hasn’t been a ground breaking success right now, yet it's hoped that it would succeeded in reviving the windows mobile app development. And interestingly, surveys are also showing much excitement among mobile app developers. According to a research conducted by visionmobile, windows phone platform is surely enticing app developers to engage in.

According to the report, ‘57% of the mobile app developers gave vent to their interest in windows phone platform.’ It’s worthwhile to note that the sample size in the survey is quite smaller to represent the whole population’s priorities. Moreover, these are just plans and aren’t going to be realized overnight.

Surveyors have commented on their findings as ‘though new Windows phone is a ‘cool phone’ but to create a developers hive as big as of Apple and Android, dramatic actual adoption is needed at one, or all this go in vain when the balloon goes up’.

But, there are some genuine indicators as well to testify the credibility of the report. One thing is for surely true about Windows app development and that is its ease of coding and prototyping, relatively low cost development and simpler learning interface.

Moreover, new Kernel allows developers to develop apps for both desktop and mobiles simultaneously; it means that all .Net programmers are potentially windows mobile app developers as well.

As far as other developers are concerned, 28 % plan to labor in iPhone app development and 25% are interested in android app development. The graph below tells the whole story with the source.

Social Media Platforms are providing companies with the chance to promote and advertise their brands and commodities with a user friendly channel. Due to increa....

Mobile application development is under its rainy days and historically it’s the quietest period for mobile apps development and promotions, as it looks from th....

Apple’s WWDC 2012 was passionately being awaited in tech cosmos as supposedly it bore the news about ‘iPhone 5 release date’ along with other Apple 2012 venture....

New Generation iOS 6 — Everything That You Need To Know

In WWDC 2012, Apple unveiled its next generation iOS 6 which bears more than 200 new features and upgrades; deep Facebook integration, better  Siri and next gen....