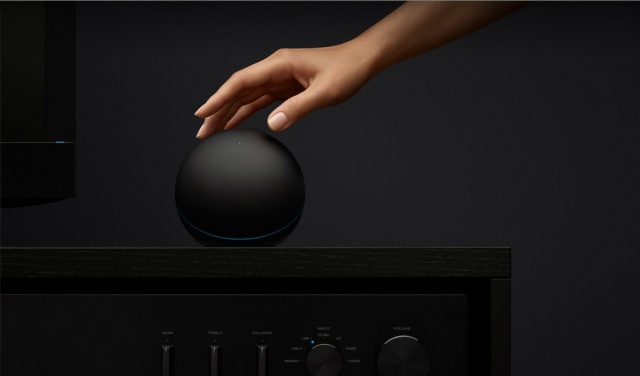 Google’s I/O Conference 2012 has ended last week but the news rolled out during the stage maniac aren’t going to leave us at least for the next couple of months. Google has both been disparaged and praised for its new line of products but one thing is above board that Google now wishes not only to act as a universal gateway to world’s information but also is passionate to integrate deeper into human needs by fulfilling masses’ social needs.

After kicking off with Google+, Google has now come up with Nexus Q; a social streaming device that aims at making our lives more digital and more exciting. As of it its physical appearance, it’s a ball shaped sphere connected to Cloud for playing YouTube and Google Play. Often posed as ‘ball of awesomeness’ by several Google’s employees, what does Nexus Q bring with for the price tag of $299.

This ball is Android empowered accessory and any Android phone or tablet can control it via Bluetooth. While using you phones as remotes, Nexus Q can be connected to any Wi-Fi network, and thus, any videos and music can be played. The device corroborates only with Google-owned services; Google Play, Music, YouTube and Google TV as well.

Google’s execs have lately observed that listening to music is becoming an isolated experience and it’s time to make it social again. So, in efforts to make listening music social experience again, Nexus Q allows your friends and acquaintances to help you making an interesting music playlist.

Though at this time, Nexus Q looks quite weird and expensive device, but it would be too early to fly off too quickly from it. Android application development has already put Android phones to brighter realms of user experience, it can be hoped that soon other android apps would also pop up in industry to make balling experience more rejuvenating and exciting.

Share this Post:
⇐RIM Dicing Against Death – BlackBerry 10 Delayed, Jobs Cut Down, Dipping Revenue
In 2012, Google+ Is A Ghost Town — Yet It Would Manage To Survive Till 2050⇒