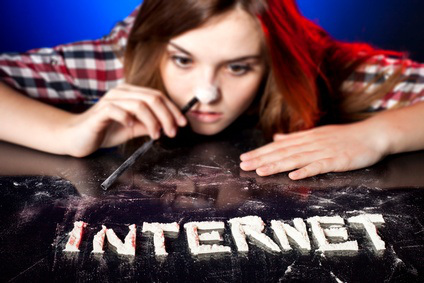 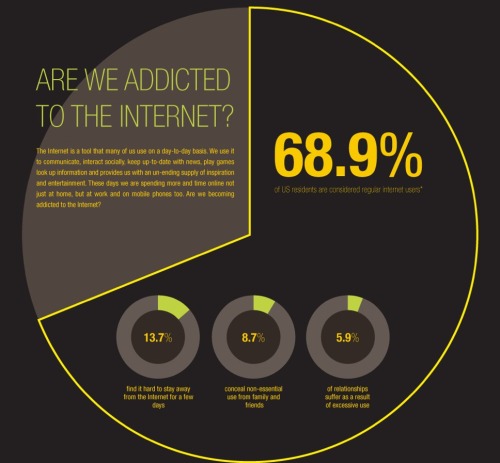 Are you addicted to the Internet?

If so, you’re not alone. Some 61% of people feel addicted to the Internet and are unable to quit browsing, according to an informal survey. Internet addiction is now a serious public health issue that should be officially recognized as a clinical disorder, according to a leading psychiatrist. it would appear that socialization is what makes the Internet so "addicting.

A survey of 602 people held on Feb. 16 to know about either people experience Internet addiction or not, and found that many people are self-diagnosed addicts. Also, The Internet polling site SodaHead.com this month asked their visitors this question: Are you addicted to the Internet? The poll finds that 61% of respondents said in fact they are addicted to the Internet, while the other 39% said they could quit if they wanted to. Women experience addiction more than men, with 64% of women compared with 55% of men reporting the symptoms of addiction.

Interestingly, respondents addicted to other behaviors were less likely to be addicted to the Internet. Only 48% of smokers, compared with 65% of non-smokers, experience addiction. The margin between drinkers and non-drinkers was narrower, with 57% of drinkers and 64% of non-drinkers describing themselves as Internet addicts.

Among respondents who felt addicted, teenagers between 13 and 17 were worst off, with 73% reporting addiction. As respondents get older, they reported subsequently less addiction, with the exception of those 65 and over, who feel more addicted than their counterparts between 45 and 64.

The poll found that the Internet users who spend the most time online were the least likely to be Internet addicts. Those between 45 and 54, on average, spend the most time each week online, reporting almost 40 hours of browsing each week. Teens, who feel the most addicted spend the least amount of time online, reporting only 22.3 hours per week of use. They are mostly spending their time on E-mail, a discussion forum, chat, or a game online

Now, do you consider yourself an Internet addict? How many hours do you spend online each week?

Let us know in the comments.

Web development has undergone a complete metamorphosis during last 3 or 4 years. The devices and tools are enduring so much improvisations and alterations which....