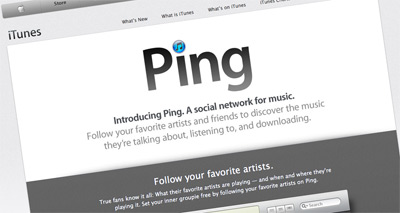 Music flavored social networks are getting hard to get along with more engaging and deeper social networks. Even king-maker Apple’s ‘Ping’ which’s entertainment network and was released with iTunes, bears stews form its CEO.

On Tuesday, Apple’s CEO Tim Cock spoke about Ping in such remorseful way and said,

“We tried Ping and I think the customer voted and said this isn’t something I want to put lot of energy into’. On being asked about dumping option Tim said, ‘I don’t know, we’ll at that’.

iTune Ping lets the users to follow their favorite artists and friends and discover what tunes their friends are listening to and likewise know what their favorite singers are upto.

Ping had some vibrant activity in its early days and it soon surpassed 1 million users but all this proved to be a moon-shine. It’s ironic that it was heralded as ‘MySpace Killer’ and now Apple is looking to kill Ping itself. Ping might be banged hard shut because there aren’t any real-time popular singers and artists subscribed to Ping and furthermore, the little that are there never update any of their information. So the lure for the users never comes upfront.

How this all affects Ping users isn’t anything to worry about. Users prefer ‘Twitter’ and ‘Facebook’ for digging into their friends’ activities and singers’ creativities. Apple is already world’s biggest tech company and failure of Ping won’t even affect its single speck. There’s much fortune and buzz that Apple can create in any web development company.

What’s next in Apple’s inventory? Next generation iPhone and new iOS are the main products passionately awaited. So, let’s wait until the beans are spilled next time.