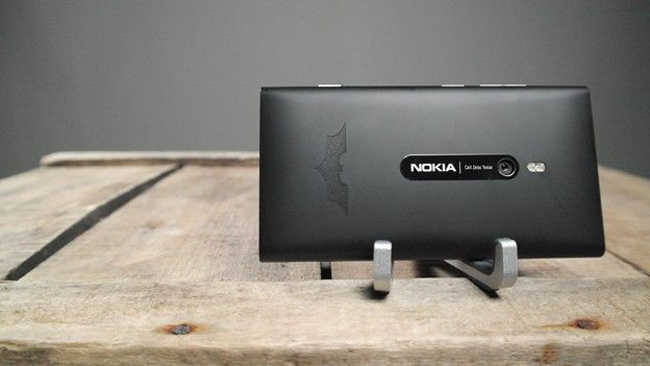 As for movies, this summer is perhaps swept by superheroes, sparked off with ‘The Avengers’. The next big thing rolling out on theatres would be Christopher Nolan’s ‘The Dark Knight Rises’. Yes, in this summer, the Dark Knight would resurface and again protect the city from terrorists. Enough about flicks! From Nokia's Twitter account, we learn that ‘Nokia is going to launch its Batman-themed Lumia 900 just in the times when The Dark Knight Rises’ hits the theatres’. This custom Lumia 900 straight from Gotham city is all the same as Lumia 900 and the only difference that it makes is ‘laser-etched insignia’ at polycarbonate body. Last year Nokia did employ the same marketing nets when it released ‘very limited stock’ for the Batman-themed Lumia 800. The Dark Knight – Lumia 900 would dash in UK, Germany, France and other European countries but there’re no reports asserting its entrance in the US. It doesn’t necessarily mean that Bat-man themed smartphone would not hit other countries, but it wouldn’t be available right under the swing of Dark Knight Rises. Pricing isn't discussed yet. As the clouds of Olympics 2012 have also reached right on the heads, web development industry is particularly feeling the swing and sway. Most of the local businesses are vying for web application development and other e-commerce solutions . And this batman-themed Lumia 900 confirms that big brands of the world are also looking to gleam most out of these public events. Hundreds of Android phone apps are already staged for Olympics. But in mobile application development , iPhone apps are most synthetic, particularly due to deeper market penetration into European markets. Anyhow, both Dark Knights, Christopher Nolan’s and Nokia’s, are highly anticipated and the earlier you could get your hands on them, the more enjoyable your summer would be.
Share this Post:
⇐Why Pinterest’s Herald Wists Failed — A Lesson For Startups
72% Of the Customers Abandon Shopping Cart Sales Due To Bad User Experience⇒