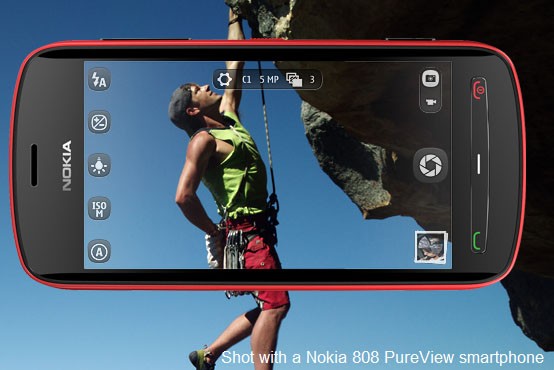 If yes, Nokia cares for you! On its Facebook fan page, Nokia told that it ‘may’ bring in a new symbian smartphone; Nokia Pureview 808 with Brobdingnagian ’41 megapixel built in camera. Nokia had already announced earlier in this year that it has created some wonderful algorithms with pixel over-sampling technology, which can take the mobile photography experiment to the new levels of excitement and thrill.

Currently most of the mobiles come with 5mp and highest in the lane have 8mp. So, 41 mp means ‘beyond excellent photo’ which could be zoomed 7 times better than the traditionally captured photos. And likewise the quality of the photo wouldn’t suffer even a single speck displaced or disjoined.

The teaser image posted at fan page carries ’18-06-12’ on it and surprisingly this is the same date which MSFT has selected for its ‘mystery event day’. Many have been misled by the assumption that both Nokia and Microsoft would break some same news; presumably MSFT’s tablet. But the signs are touting some other breakouts.

Nokia’s Pureview 808 is a Symbian phone and if it makes way to USA, it would be sold unlocked. This means that it won’t be glued to any particular carrier for being unlocked but you must pay in full to have hands on it.

Much zeal and zest has been observed among mobile application developers. Di-polar app development; iphone app development and android application development, now, also need some tough competition so that developers could opt for other tools as well. If Nokia’s 808 becomes a street and market success, Symbian would find revival and likewise, smartphone industry would also reach some more versatile grounds of exploration.

Nevertheless, how do you feel about having a ’41 megapixel camera’ and how are you planning to use it?