It all started in 1421 when Florentine architect Filippo Brunelleschi received a three-year patent for a barge with hoisting gear, that carried marble along the Arno River. Since then, significant patents have been issued over various inventions over the years. We read a lot of blogs and articles about patents being issued everyday and all the giant companies are mostly involved in this blame game of patents and lawsuits. But how do they affect a company? How important are they for the growth of the company and what benefits does it bring to the company? These are some of the questions that an average layman has and here I will try to answer all these questions with the help of some examples.

I shall startoff with the recent $12.5 billion acquisition of Motorola by Google, to save one of their best innovations; Android. Google just needed 18 of Motorola’s 17,000 patents to do that but they had to buy out an entire entity for that. The patents include innovations covering location services, antenna designs, e-mail transmission, touch-screen motions, software-application manages and 3G protocols.Now let’s see what made Google disturb their cash flow by making such a big investment. Earlier Google wanted to acquire Nortel Patents but lost that bid to Apple, Microsoft and Ericsson and therefore had to acquire Patents to ensure the survival of Android without any hindrance. Apple is already a mobile phone company with all the necessary patents they need and Microsoft is collaborating with HTC and Nokia to produce Windows mobile, so Google had to make a move to better secure their place and get patents since Google is a rookie in the mobile development field as compared to their competition. Just to make it more effective and efficient Google even hired a patent expert when they lost the bid. Eric Schmidt, chairman of Google Inc., made a point by saying that they acquired Motorola for more than Patents, but not even Eric Schmidt can deny the fact that apparently it was for the patents and the product line they got in deal is a bonus as they still haven’t planned anything on it yet. Rumors have it that Google won’t indulge itself in the making of handsets and compete its own alliance(as HTC and Samsung are already using Android to make their handsets). One of Google’s top layers, David Drummond, even went so far that he wrote a blog and accused big giants like Microsoft of abusing patents to block Android from competing. Google still needs enough patents to protect Android which is why they might look to acquire InterDigital’s 8,800 patents in the coming time. So the importance of Patents can’t be denied for Google.

In this war of the patents, it’s not only Google which is fighting. All the giants are equally participating in the blame game. Apple recently filed a lawsuit against Samsung in Germany to stop their Galaxy Tab 10.1. A patent was filed by Apple on the grounds that the Galaxy Tab 10.1 infringes on the design of iPad2. After official hearings the court ruled that Samsung cannot sell its Galaxy Tab 10.1 because it looks too much like iPad2.This clearly helped Apple capture a market for their iPad 2 and increase their sales as well.Had they not fileda lawsuit against Samsung, they might have had to share the market with Samsung Galaxy Tab, but the patents helped them win a significant market share, eventually increasing their sales and profits. This is how it goes, once a company launches a new product they claim it using patents and make sure that they protect it. It’s pretty unlike intellectual property theft where anyone comes up with an innovative idea which is stolen and no one can claim anything against it. Patents gives you the right to claim your product and fight for it ensuring no one copies it and you hold the unique selling attribute of your product.

The graph below shows the number of Patents being claimed by different companies. 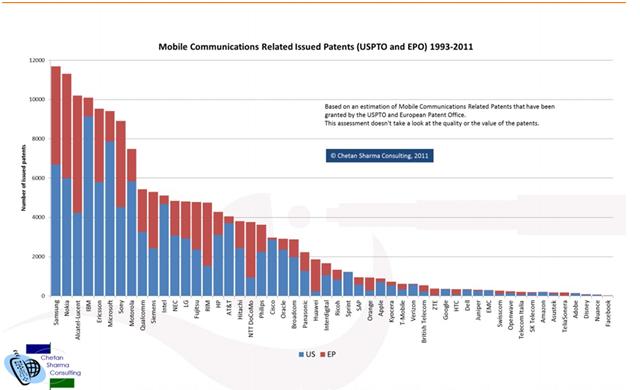 From this graph one can clearly see the number of patents being claimed by the giant companies in the tech world. Samsung has way more than 10,000 patents filed under their name. It is quite evident from these findings that almost all the companies are in this patents warfare. Patents are intangible assets of a company.

This patents blame game doesn’t seem to have an end and it will go on with all the brimming technological advancements taking place currently, with time it will grow as more new products will be launched and innovation will continue to incur. 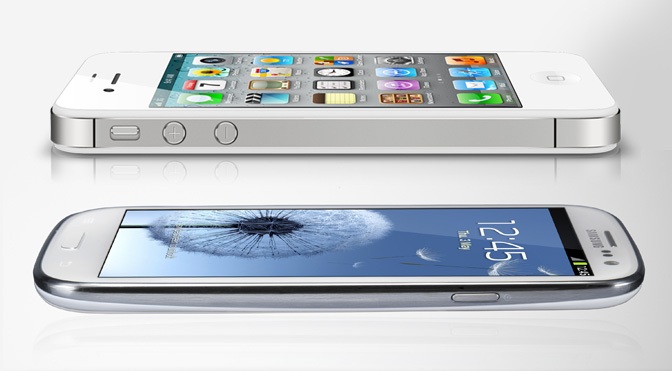